A new kind of working

As I reflect upon the path of my design career, I’m struck by how the uncomfortable space of the unknown has defined its trajectory. I’ve always been an outsider: as an architect non-architect, a non-textile designer designing textiles, a non-biologist designing with biological systems— outsiderhood has defined me. Being an outsider also has its merits: in resisting categorization, I am free to deal with a design problem by blending different fields of knowledge without prejudice. There’s an informed feeling-around for solutions that often leads to unexpected conclusions. I’d argue that this culture of multidisciplinary “doing” is simply what it is to be a designer—to have a firm grasp of the multitudes of elements and actors that give form, life, and reason to any endeavour, regardless of its beginnings. To operate as a creative practitioner at the intersection of design, biology and technology, it seems to me, is to be in a state of determined inventiveness, curiosity, and un-knowing. Inventing new languages, practice identities, terms of engagement, ways of knowing, and methods of making. A curious mind is an open mind: one that interacts without assumption between spaces and their people, always asking questions, seeking connections, letting go of perceived hierarchies, and persisting in the realm of seemingly immovable constraints. The un-knowing, refers to a sense of doubt: what is my practice? Where can it live? How can it contribute value? But more critically, un-knowing is a vital method of operating in new territories at the edge: to un-know received mythologies, to un-know dominant truths, to un-know accepted categorizations. This conscious un-knowing can shift ground from the implausible to the self-evident: new kinds of knowing emanate from here.

I work with micro-organisms as co-authors (must be credited); industrious tools (can be patented); speculative frameworks (can be illuminating/ contested /misunderstood /appropriated for commercial gain); companion species (can engender unlikely relational symbiosis). They are also organisms that inhabit the world with an agency of their own. And so what does it mean to co-create with nature? What types of environments can host this potentially disruptive enterprise?

Coaxing the bacteria S. coelicolor to affix dyestuff on to textiles requires trillions of cell factories growing in synergy with an instigator (me) and distinct environmental conditionalities. In turn, the instigator’s rhythm is set by the biological constraints of a microbe that lives and dyes in 7 days. Since my practice depends on much broader expertise than that which can be located in design alone, I triangulate this work with expert individuals, representative institutions and key sectors of industry. The Ginkgo Faber Futures Residency 2017 is a story of one such experimental mode. A new space for making

I first met Christina Agapakis at a Biofabricate conference. Our conversation was brief, but it was in the spirit of a shared recognition of the deepening confluence of design and biology. I came away instinctively knowing that we could build bridges across disciplines together. A year or so later, we decided to develop a project which would be collaborative on two fronts. First, we wanted to embed my practice into Ginkgo’s foundry: to see how the technologies that underpin Ginkgo’s platform would interface with the experimental and design-led processes to dye textiles with biopigments I had developed at the Ward Lab, in collaboration with Professor John Ward (Advanced Centre for Biochemical Engineering at University College London). This would take the form of an exploration of scale—from my artisanal scale to the industrial scales of biology at Ginkgo. Secondly, we wanted to frame this engagement as a residency program, for us to learn by doing, what a valid approach to introduce creative expertise into the culture at Ginkgo might look like. Key to this pilot residency was identifying the ideal requirements of the practitioner to fully realize a project. For example, her ability to maintain a level of freedom and autonomy; her ability to integrate with teams across various functions of the company; and her ability to communicate internally and externally about the work in progress—all this as relates to the conditions of a start-up environment.

Together, Christina and I developed a framework of collaboration that eventually gave us measurable insights to further refine programming of a creative residency, with a focus on enabling the creation of new ways of working, sharing ideas and instigating valuable interactions, in balance with the dynamics as mentioned above. Based on the in-depth learning from my five months at Ginkgo, our shared appreciation of the importance of creating space for meaningful dialogue across disciplines, and consultation with a diverse range of cultural institutions and industry advisors, we have developed the Ginkgo Creative Residency to provide a comprehensive starting point to that effect.

A new way of making

While Christina and I mapped out how we could work together, I was engaged with IASPIS Konstnärsnämnden on a residency program in Stockholm, Sweden that awarded time to think and to connect the dots in my own work and to connect with people. Far from my laboratory space at the Ward Lab, and deep within one of Sweden’s most important cultural institutions, I used the time to employ other modes of experimentation: creating interdisciplinary networks across private and public bodies through conversation and exhibition of my ongoing protocol development. I was designing a number of milestone design-led protocols to achieve specific aesthetic finishes with S. coelicolor, while expanding the scope of application from fabric samples towards the body and architectural scales. For example, I formulated a system for dyeing a whole garment, which drew insights and technical knowledge from design disciplines as diverse as fashion pattern cutting and engineered print design. In discussion with Christina, we saw an opportunity to execute the project ideas that I was developing at IASPIS from within Ginkgo.

As I continued my research I also returned to Flesh: Architectural Probes, 1996 by Elizabeth Diller and Ricardo Scofidio. I had explored their notion of “maxims of scale” from the project Dissident Ironing in my architectural thesis on deconstructivist fashion and architecture 7 years earlier. On this second reading, more convincing parallels with my present challenge of scale became apparent. Dissident Ironing reveals how the economics and ergonomics of the packaging and shipping industry determine the dimensionality of wardrobe design, and how both the choreography and constraints derived from, and imposed by ironing a shirt (women’s work) to fit into said drawer drives the aesthetics and style of what is considered the culturally appropriate way of dress. Those orthogonal, deliberate creases living on the wearer of formal attire are part of a broader framework of global, and in turn hyper-local conditions of the availability, transformation, distribution, consumption and culture of any given resource. What Dissident Ironing does is question those frameworks and seek new ones: making and then ironing(!) to disrupt the cultural and economic constraints for standardized mass-manufactured products.

There are questions here of how the scaling of biology performs in the aesthetic and cultural realm based on the implications of the production and distribution of biologically-derived materials. In other words, does the scaling of a biological construct, however replicable, return a standardized product? Variation and adaptation is inherent to biology; if we are able to go beyond the notion of the drop-in replacement (of a chemical dye to a biological dye), what new manufacturing paradigms and indeed business models can emerge?

I discussed the architecture of the foundry and the dimensionality of some of its tools and machines with Christina to visualize the scale of intervention that I could engage with at Ginkgo. If mine was an exploration of scaling a graphic print made by direct dyeing of a live S. coelicolor on textiles, the scale of that overall print would be contingent on the size of an autoclave, a fume hood and incubator. Just as the size of a glass pane of a building is dependant on the tools of manufacture and the distribution model for the product, I wanted to understand from a making point of view, what minimum viable product inherent to Ginkgo’s capabilities could be obtainable. How would the scalability of Ginkgo’s foundry determine the scalability of my own biofabricated textiles?

Nothing had really prepared me for my arrival at Ginkgo Bioworks (don’t worry I won’t spoil the fun with too much detail here!). What I will say is that I’ve often spoken about the choreographic nature of the protocols I develop and how innate they have become when I am at work under the hood. But then, during my first walk-through of the laboratory, I witnessed robots transmitting tiny drops of liquid in synchronicity with algorithms keeping pace with the variable the growth conditions of living matter. From a design perspective, this choreography as far as I could tell, was open to interpretation and to collaboration from designers. 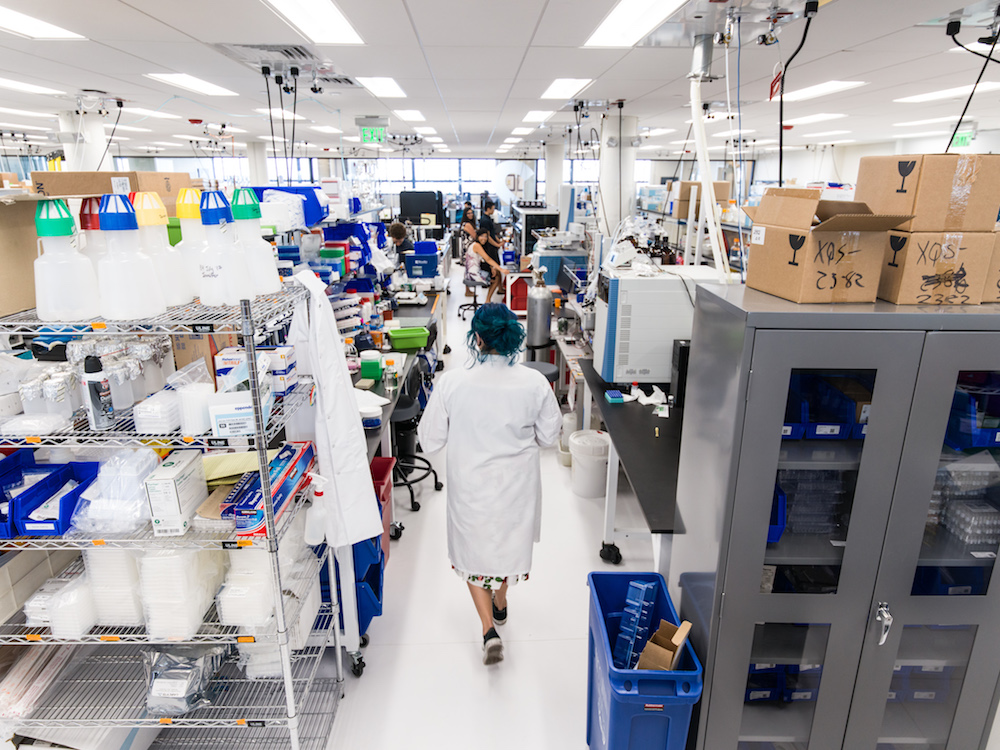 Five months at Ginkgo seemed like a long time, but it flew by! With competing projects like preparing for my TED talk and exhibiting work in progress at Craft Council UK’s A New Materiality at TRESOR contemporary craft fair in Basel, I lent a sharp focus on executing four critical experimental prototypes (note to future residents: this is too much!). From my bench space at Ginkgo, and as a resident at Autodesk Build Space, I designed and fabricated the following experimental pieces: Collaborating with Johan Kers and Micah Shepard, we made some progress on the engineering of S. coelicolor to produce more pigment.

I also led two workshops with infinitely enthusiastic members of Ginkgo’s team, taking a back seat to observe and facilitate new perspectives on my process at work.

Between exhibiting the finished prototypes at [email protected] in Milan and at Hubweek in Boston, and my final week at Ginkgo, I managed to iterate on Void with a second round of experimentation using an improved toolkit. The print produced by the bacteria was more refined than the first prototype. This made me realise that when we talk about new design and craft methodologies that emerge from designing with living systems, there is much work and practice to be done: masters of a craft must first master their tool-making, to master the tool, to master the art.

Biology is now a design space and biologists design. In both contexts, the parameters of design are mediated by scale, which calls for multi-level thinking of the systems of design and making, engineering and growing. This thinking extends to how the products of a designed nature interface with all of the complexity of the outside world. Outside of the laboratory, a multiverse of agents across politics, economy, society, culture, ecology hold a mirror back to that molecular scale. What can be designed at the DNA level embodies the value, utility, meaning, impact, and even risk to the society it is meant to serve, always reflecting backwards and forwards as it iterates across multiple scales.